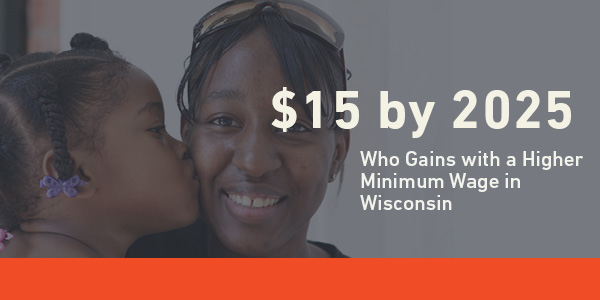 We’ve released a new factsheet on how raising the minimum wage to $15 by 2025 in Wisconsin would impact the state’s workers. Using data from the Economic Policy Institute’s recently released report on the Raise the Wage Act of 2021 (which would raise the national minimum wage to $15 per hour by 2025), we’ve summarized findings for Wisconsin and added some context to fill in the picture on wage standards in the state and region.

COWS’ State of Working Wisconsin 2020 showed the ways the pandemic and the COVID-19 economic collapse has exposed and exacerbated economic inequality in the state. The workers who have carried the brunt of the economic burden are disproportionately people of color and women, working in our lowest wage sectors. These are the very workers who stand to gain from a higher minimum wage.

Want the Wisconsin data set for your own analysis? You can download it here.

30% of Wisconsin workers stand to gain

Nationally, raising the minimum wage to $15 per hour by 2025 would raise the earnings of 32 million workers, or 21% of the workforce. In Wisconsin, a greater share of the workforce would see a raise. 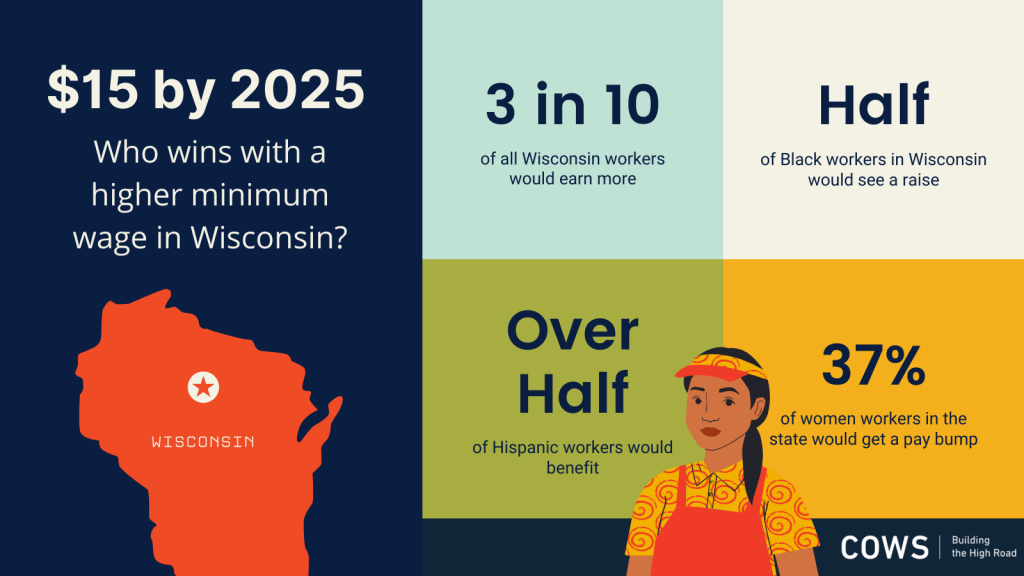 Three of every ten workers in the state – more than 843,000 workers – would benefit.

A minimum wage increase to $15 by 2025 would help close racial, ethnic, and gender wage gaps.

Wages up and “little to no job losses”

Minimum wage increases have not led to significant job losses. According to the Economic Policy Institute:

“Despite claims that raising the minimum wage would reduce job opportunities for vulnerable groups of workers, the best evidence shows little to no job losses in the wake of minimum wage increases and a net wage gain even if job losses have occurred. These benefits explain why surveys show that the people most likely to support a minimum wage increase are unemployed people, people of color, and women.”

Other states raise the floor – and Wisconsin workers are left behind

In the November 2020 election, the state of Florida passed a referendum putting that state on the path to a $15 minimum wage. In the last two decades, statewide minimum wage increases have gone to voters 22 times. In each instance, the wage increase has passed.

By joining our e-mail list, you will receive COWS Notes, a periodic e-newsletter that keeps you posted about COWS activities. Occasionally, you may receive other timely announcements of interest.