More than a decade after the Great Recession, the national and state economies have largely recovered. This recovery, though slow by historical standards, is more than welcome. But from the perspective of working people in Wisconsin, serious longer-term challenges remain. Many of these problems are not unique to the state, even so, they are daunting. Wages have been nearly stagnant over the last 40 years. Income is lower today than it was in 2000. Low-wage jobs – indeed, low-wage careers – define and constrain the prospects of too many workers. And finally, while racial inequality is not unique to Wisconsin, it is extreme here. Black/White disparity measured for key economic and educational outcomes and incarceration rates place Wisconsin among the most racially unequal states in the nation.

The State of Working Wisconsin 2018 uses the best and most recent data available to inform these broad outlines and refine our understanding of how working people in the state are doing. To paint a comprehensive picture of the economic reality of working people, we rely on a variety of data, most often from the federal government. We provide data on the labor market and the recovery from the Great Recession, but also offer a greater focus on longer-term trends that have altered opportunity, equality, and outcomes in this nation and state.

The State of Working Wisconsin 2018. Our Labor Day release includes the following chapters:

The state’s economy and workers’ experiences are more clearly understood with an understanding of the size of the economy and its population which we provide in this chapter. The size of state economy and key sectors are described. We also provide key data on Wisconsin’s population, diversity, and demographic shifts.

Scale of the Wisconsin Economy: State GDP and Key Sectors

“Per capita personal income” is one way to measure the overall size of the economy and compare Wisconsin to the nation. Figure 1.1 shows Wisconsin’s per capita income from 1981 to 2017, offering a good view of the evolution of the size of the Wisconsin economy. (Data here and throughout this report are adjusted for inflation and expressed in 2017 dollars, unless otherwise noted.) The depth of the 2007 recession is evident. Wisconsin’s per capita income, showing only weak growth across the first years of the 21st Century, fell precipitously in 2008. But since 2012, per capita income has grown.

Table 1.1 places this trend in the regional context. Wisconsin’s growth in per capita income in the 21st Century has lagged the national growth rate. But the table shows that this slow growth is shared by states throughout the Midwest — with the exception of Iowa and Minnesota. Iowa’s per capita income growth outpaced all other states in the region and the national rate as well. Minnesota matched national growth rates.

Wisconsin’s Gross Domestic Product (GDP) is the value of all goods and services produced the state. In 2017, the total GDP for Wisconsin was $324 billion. Figure 1.2 shows the contribution of each sector to overall GDP for Wisconsin, the Great Lakes states, and for the nation.

Manufacturing, accounting for 18.2 percent of the state’s GDP, is Wisconsin’s largest sector. Wisconsin’s manufacturing sector is slightly larger than the 17.7 percent GDP across Great Lakes states, and significantly exceeds the national GDP share of manufacturing (just under 12 percent). Agriculture also stands out, with the state generating a much greater share of its economy in the sector than the region or the nation. Finally, and in worse news for the state, Wisconsin lags in the professional, scientific, and technical services and information sectors with those accounting for just 4.2 percent of Wisconsin GDP while those sectors account for 7 percent of the national economy.

Manufacturing remains critical to the state economy. The sector accounts for nearly one-fifth of the total output of the state and Wisconsin consistently vies with Indiana to post the nation’s highest manufacturing share of the overall workforce. The sector has faced serious crises since the turn of the century; even so, Wisconsin’s manufacturing sector remains essential to our economic output and to jobs.

While it is true that the manufacturing sector has added jobs in the recovery, losses in the sector have been the predominant story over the last 20 years. Figure 1.3 provides perspective, showing Wisconsin’s manufacturing employment from 1998 to 2018. The welcome gains across recent years have not made up for losses across the recessions of 2001 and 2007. The Wisconsin manufacturing sector had nearly 600,000 jobs in 2000; today the state holds fewer than 500,000 manufacturing jobs.

The Wisconsin population has been slowly growing and now stands at 5.8 million. From 2000 to 2017, the state added some 400,000 residents (see Table 1.2). The pace of this growth is a matter of perspective. Relative to many neighboring states, Wisconsin’s growth is strong. At the same time, the nation is growing twice as fast as the state. Of neighboring states, Minnesota (population up 13 percent) and Indiana (10 percent increase) are growing more rapidly than Wisconsin.

There are two central and related dynamics in the demographics of Wisconsin. Our population is becoming more diverse and our population is aging. We consider each of these in turn.

Figure 1.5 shows Wisconsin’s increasing diversity. The state’s population is still overwhelmingly White (Whites account for more than 80 percent of the population). But the state is substantially more diverse today than it was in the past and projections show that it will continue to become more diverse. The Black share of the population will continue to grow slowly while the Latino, Asian, and mixed race shares of the population are projected to grow quite substantially. By 2050, people of color will account for more than three in ten of state residents (compared to fewer than two in ten currently).

Importantly, though, Figure 1.5 also makes clear that Wisconsin is and will remain substantially less diverse than the nation as a whole. (The percent White in Wisconsin is shown by the light grey areas in the figure, while the national percent White is shown by the grey trendline in the background.) Indeed, by 2050, while people of color will account for only 3 out of 10 Wisconsin residents, people of color will account for the majority of the population nationally.

Wisconsin is aging as it diversifies. Figure 1.6, from the University of Wisconsin Applied Population Laboratory, shows projections of increasing age clearly. In 2020, one in five state residents will be 65 or older but by 2040, one in four state residents will be in this age group. Given growth in the state population, the raw numbers are striking. In 2010, the state had 770,000 residents aged 65 or older. By 2040, projections suggest that this number will double to some 1.5 million.[1]

Contributions of Immigrants and the Wisconsin Economy

As the population ages and baby boomers move into retirement, the state will be challenged to increase the productivity and size of the workforce. Immigrants to the state are an essential answer to these coming economic issues. As we showed above, the state’s population is diversifying especially because of increases in Latino and Asian populations. Many of these residents are immigrants to the nation. Here we focus on their economic contribution to the state. 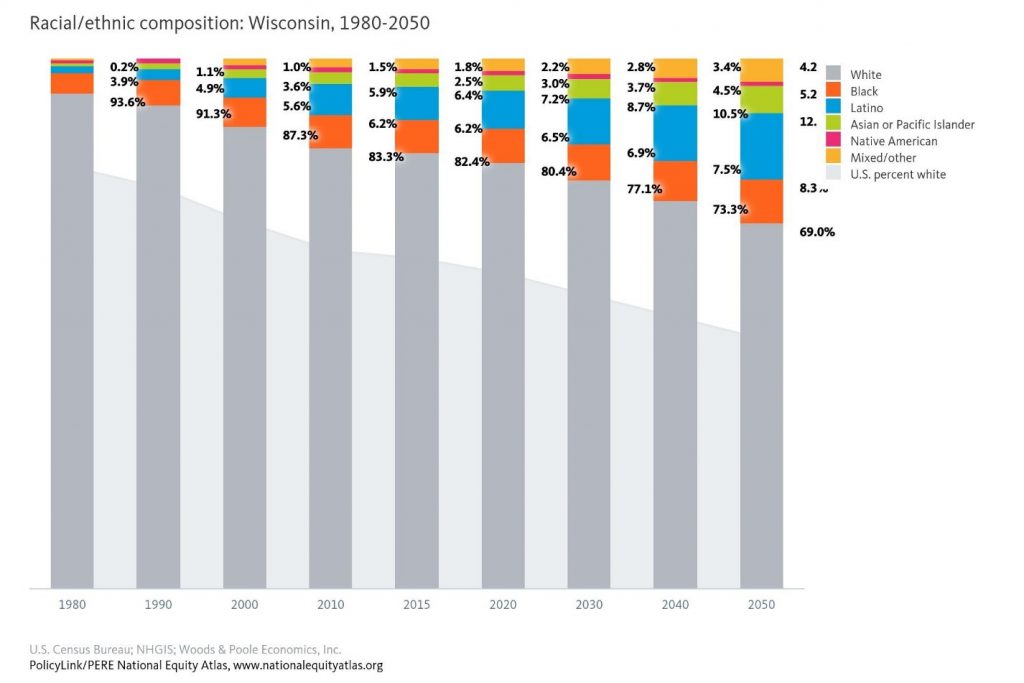 Immigrants in Wisconsin, although only comprising five percent of the overall population, are a vital part of Wisconsin’s economy. They comprise 7.2 percent of business owners, 6.2 percent of the working-age population, and nearly six percent of Wisconsin’s labor force. As is shown in Figure 1.7, immigrants comprise more than their share of the workforce in several occupations, particularly in Farming, Fishing, and Forestry; Life, Physical, and Social Sciences; Computer and Mathematical Sciences; and Production.

Wisconsin immigrants contribute billions of dollars in taxes and business revenue every year; immigrant-led households in the state paid $1.4 billion in federal taxes and $675.4 million in state and local taxes, and undocumented immigrants in Wisconsin paid an estimated $71.8 million in state and local taxes in 2015. Immigrant entrepreneurs in Wisconsin also generate nearly a quarter billion dollars in annual business revenue: 14,866 immigrant business